UPSC Recruitment 2019/job details we have mentioned here. You can find here all details about this recruitment find here. 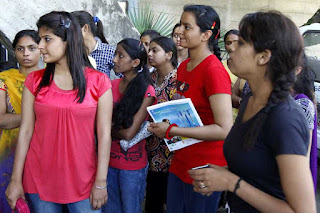 Job Location: All Over India

Graduation details are
For I.M.A. and Officers’ Training Academy, Chennai
Degree of a recognised University or equivalent.

For Indian Naval Academy
Degree in Engineering from a recognised University/Institution.

For Air Force Academy
Degree of a recognised University (with Physics and Mathematics at 10+2 level) or Bachelor of Engineering.

Graduates with first choice as Army/Navy/Air Force are to submit proof of Graduation/provisional certificates on the date of commencement of the SSB Interview at the SSB.
Candidates who are studying in the final year/semester Degree course and have yet to pass the final year degree examination can also apply provided candidate should not have any present backlog upto the last semester / year for which results have been declared upto the time of submission of application and they will be required to submit proof of passing the degree examination at the time of commencement of course

Mentioned age limit in notifcation
For IMA
Unmarried male candidates born not earlier than 2nd January, 1997 and not later than 1st January, 2002 only are eligible.

For Indian Naval Academy
Unmarried male candidates born not earlier than 2nd January, 1997 and not later than 1st January, 2002 only are eligible.

For Officers' Training Academy
—(SSC Course for men) unmarried male candidates born not earlier than 2nd January, 1996 and not later than 1st January, 2002 only are eligible.

For Officers' Training Academy
(SSC Women Non-Technical Course) Unmarried women, issueless widows who have not remarried and issueless divorcees (in possession of divorce documents) who have not remarried are eligible. They should have been born not earlier than 2nd January, 1996 and not later than 1st January, 2002.
Candidates Relaxation in Upper Age limit will be provided as per Govt. Rules. Go through UPSC official Notification 2019 for more reference

Application Fee/Exam Fee:
Candidates (excepting Female/SC/ST candidates who are exempted from payment of fee) are required to pay a fee of Rs. 200/- (Rupees Two Hundred Only) either by depositing the money in any Branch of SBI by cash, or by using net banking facility of State Bank of India or by using Visa/Master/Rupay Credit/Debit Card.

Procedure to apply
All people can refer Official website https://www.upsc.gov.in/ from 30th October 2019 to 19th November 2019 till 6:00 PM. Before applying, Candidates should ensure that they fulfill the eligibility criteria as per published in the online advertisement.